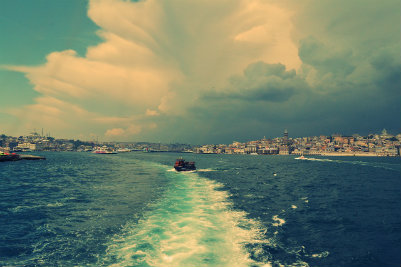 "The Marie A" by John W. Deaver

The Germans boarded the merchant tug Marie A on her final rendezvous. One slip-up would doom the mission, possibly getting me captured, or killed, or worse. After a lengthy interrogation, they would probably shoot me as a spy, so I resolved to jump into the sea, if necessary, to avoid capture.

Two fishermen, Bruno and Dumont, were our crew. They spoke only French, but they could have blown our cover with a single word. Captain Papa Jacques, however, watched over them one rainy night in June when a Kriegsmarine patrol boat came alongside and signaled us to heave to.

The deck of the Marie A pitched wildly in the darkness as a naval officer and his mate came aboard and inspected the crew. "Ihre Ausweise, bitte!" the officer demanded.

Papa Jacques showed him our identification and the boat's manifest ordering us to report to the harbor master at Aubuchon. The officer spoke some broken French with Bruno and Dumont, but when he looked at me I tried to appear as hopeless as possible. Papa had instructed me ahead of time to act dumb. I didn't understand what the officer said anyway, so I just replied with a few syllables that sounded like, "Fmmph, mmmph!" I hoped it meant drop dead in French.

Papa explained that I was his slow-witted nephew visiting from Portugal. I remained mute, since I obviously couldn't speak any Portugese, either. He showed the officer a Portugese passport with my picture and the name Simon Escobedo.

"Sie sind Simon, eh?" the officer addressed me with a grin.

I stuttered stupidly and agreed with the man. "Simon, si!" And he nodded his approval.

The officer and his mate searched the Marie A from the pilot house to the engine room, but came up empty handed. The only contraband they found were a few extra packs of Galloise cigarettes and a half bottle of cognac in the first aid kit. Papa quickly remedied the situation by sharing our smokes and the rest of the booze. The officer did not notice anything else suspicious aboard the little craft.

"Danke schoen," the officer said. Having finished the cognac, they found our papers to be in proper order, and sent us on our way. It wasn't until their running lights had disappeared in the fog and the launch's engines had faded in the distance that I could finally relax. The Germans found nothing!

Papa Jacques resumed his station at the helm, and Bruno and Dumont brought the Marie A underway again. Less than an hour later, Papa spotted the high tide cross-currents flowing off the Pointe near Aubuchon. We remained on schedule and in twenty minutes the Marie A would enter the harbor at the seaside village.

"It is very dark," Papa observed through his binoculars as the town came into view.

"That is good. That way they will not see us coming. We will make the direct approach, eh?"

Papa Jacques rousted Bruno and Dumont topside from the engine room. I kept the throttle low and held the wheel steady while they wrestled a heavy spool of cable across the rolling deck, attached it to a pulley, and hoisted it to the top of the mast. They released a locking pin and lowered the mast with a winch until the spool stuck out like an olive impaled on a toothpick from the bow of the Marie A.

With so much weight hanging over the bow, she became very difficult to steer, and it was only with the greatest of difficulty that I kept her on a straight tack. She seemed to settle down and behave as Papa returned to the pilot house and took the wheel. He steered her toward the far end of the harbor. The old sailor checked his watch and idled the engines.

"Mon Dieu," he said. "We are six minutes early, no?" The tug floated fifty yards from the wharf off the port quarter. We shared the last of the cigarettes in the darkened pilot house as the waves lapped against the hull. The windows in the town were heavily curtained and blacked-out. Papa Jacques pointed out a cluster of buildings at the far end of the wharf.

"You see over there, my friend? Here, with the binoculars you can just make out the names. Do you see? L'Auberge d'Aubuchon. Casino d'Aubuchon. Café d'Aubuchon."

"Yes, I see. But they're all dark. The curtains are closed."

"Yes, of course. It is the blackout. But they are there. I can almost feel them."

The minutes ticked by, and finally Papa Jacques said, "It is time." We unpacked the inflatable life raft, left the Marie A, and waited for Papa to join us. "You go on up the coast, my friends," he said in French. "I will join you later, God willing."

We cast off from the Marie A without Papa. I tried to object without making a commotion, but neither Bruno nor Dumont understood me. Soon they had rowed several dozen yards along the shoreline when the engines on the Marie A roared to life. Papa opened the throttle and steered the little tug straight for the Café d'Aubuchon. He braced himself for the impact. Seconds later the bow collided with the wharf and snapped the rotten pilings like matchsticks. The Marie A came to rest with the cable spool dangling two feet from the café's picture window.

Papa waited for any response to the commotion. The blackout curtains suddenly parted. One, two, and finally three men appeared at the window. One held a cigar, another a glass of brandy, and the third held several playing cards. All wore the uniforms and insignia of Wehrmacht generals.

"Gentlemen," Papa Jacques muttered as he pulled the detonation cord, "May I introduce you to my darling, the Marie A?" One second later six hundred pounds of high explosives concealed in the cable spool devastated the wharf, Café d'Aubuchon, and the merchant tug, Marie A.